Growing up, my brother and I would spend our summers at Camp Frank A. Day. Those days spent on the shores of Quacumquasitt were some of the best days of my life.

What I loved most about camp was the people. You really got to know people on a deeply personal level. There is something about staying up way too late and being constantly covered in dirt that allows people to truly connect. It’s like the walls we erect to keep people out slowly melt away and all that is left is the real you. Many of the people that I spent those long, beautiful summers with are my closest friends today.

A Leap of Faith

By the end of the Misfit Conference memories of my days deep among the pines would return. I realized how important these experiences are and how few we have as adults.

The first night of the conference I found myself sitting in a pizzeria in downtown Fargo, ND. I was surprised to see that the place was packed. To be honest, I wasn’t expecting much. Like most people, I knew nothing about Fargo, other than it was the name of a movie where people spoke in funny accents.

The long tables were completely covered with sheets of paper. Crayons had been randomly placed all over. Clearly, this place was made for me. Across the table from me was Brett from Tennessee, who I knew from the #140conf and SXSW. To his right sat Louise from London. Although I didn’t know her at the time we had been on the same flight to Fargo. Finally to my left sat Weston my roommate for the conference who I had just learned was in the same room as me three years ago at SXSW when we attended the same session.

As we were talking we quickly realized that none of us knew anything about Fargo. We didn’t know any of the speakers and before tonight we didn’t know anyone else who was attending. Strangely, we were all OK with that.

The only person we all knew was AJ Leon, the conference organizer. We had been following him online for some time and it was because of him we were here. Besides AJ the only other thing we had in common was that we were all willing to travel to the middle of nowhere, not knowing anyone else, and take a leap of faith to attend a conference we knew nothing about…

The devil (and magic) is in the details

From the moment I walked into the Ecce Gallery, I knew it. I knew AJ had spoiled us and ruined every other conference I would attend this year. The attention to detail was mind-blowing.

There was one long table set up for everyone to eat breakfast together. There was french press coffee with the world’s best dark chocolate croissants, that melted in your mouth. Homemade greek yogurt with honey and granola. And that was just breakfast…

The other day I tried to explain it to someone. I tried to tell them about the chairs that were restored by local artists. Or how the food was locally sourced. That every bit of the conference was handpicked and thought out ahead of time. But I found my description fell short of what I experienced.

Some time ago I learned that the mark of a master is in the level of thought and preparation that goes into their art. A level of detail that most people don’t even perceive. They don’t know why it is good, they just know that it is. I think that’s how we all felt.

We often say that the devil is in the details, but I think AJ, his wife Melissa, and their team know that the details are also where the magic happens.

“Success isn’t as meaningful if you don’t give back”

Greg’s words still haunt me. He was the last speaker of what can only be considered an all-star cast of the most inspirational stories I’d ever heard. After his life had been turned upside down due to a kidney transplant Greg was determined to make a difference. In 2007 he sold everything he owned and set out with only $10 and laptop to his name. Since that time he has traveled to almost all 50 states, started a business in an area he didn’t know and helped over 500 entrepreneurs.

His mandate to give back rings in my ears still. It is burned into my brain, gnawing at my subconscious. The conference is almost over and all I can think about is how can I give back? How can I help these people who have inspired me and connected with me for two days? I am excited and humbled by what these people are doing, work that truly matters.

From Victor who wants to reinvent higher education to Greg from Fargo who loves this city that no one has ever heard of. Then there was Justin Levy who refused to be a victim of circumstance. Pamela Slim stresses the importance of doing a body of work. Joshua Fields Millburn who is out to destroy the question “what do you do?”

I could go on but…

With the words of Brene Brown fresh on my mind, I stood up in front of the theater. We had just watched the first eight minutes of Identifying Nelson/Buscando a Roberto, a documentary film I am working on. Now it was time for questions. I told myself going into this that I would allow myself to be vulnerable.

I struggle to answer this question. I’m overwhelmed as a wave of emotion from never being forgotten comes crashing over me. How can I possibly describe what it meant not to be forgotten? For your grandmother to dedicate her life to finding you? These are not normal questions about the process of making a film. These are deeply personal and spiritual questions coming from an audience that was touched by what they just saw. This is confirmed when Tony tells me he has been to the TriBeCa Film Festival and never saw an audience so engaged.

I’m so thankful to AJ for arranging this screening. One thing I have learned over the years is that there is a difference between telling someone your story and having them experience it. This group of Misfits now rallies to support my efforts. I am truly humbled.

I sit back down as the second film Lemonade, made by my friend and fellow misfit Erik Proulx, starts to play. Now I know what Brene meant when she said “vulnerability hangover.” I just bared my soul to a group of strangers and they received me with open arms. I need a second to compose myself…

"I left with friends"

Maybe there was something in the water. Maybe it was an incredible array of speakers. Maybe it was the Midwestern friendliness. Whatever it was, this “conference” was unlike anything I have ever attended. Never have I been to an event that had such a profound impact on both “speaker” and “attendee.” The truth is that there was no difference. Everyone who attended was a bonafide Misfit in one way or another.

Everyone was so supportive and actually cared what you were working on. They were there and engaged, and in turn, you were engaged with them. You were inspired by them and them by you. You wanted to help them, you were compelled to help.

I think Srini said it best:

“Most conferences I leave with business cards, this conference I left with friends.”

Perhaps this all sounds too “touchy-feely”, too therapeutic. Maybe it was, but I think we need more events like this in our lives. It’s been 10 years since I spent a summer at camp and until Fargo, I had not experienced anything that could compare.

My time as an “adult” has been filled with meeting people, but rarely connecting as I did at camp. As adults we are scared. Scared to open up. Scared of what the other person might say or think of us. We need places like Fargo, and Camp Day to allow us to connect, grow, and be… ourselves.

Thank you AJ, Melissa, and to rest of the team for throwing such an amazing event. Thank you to all the speakers for sharing your insights and pushing us to live life with intention. And to all of my new friends, I will miss you and the time we spent together. Please keep in touch. I look forward to all the amazing things this group will do. 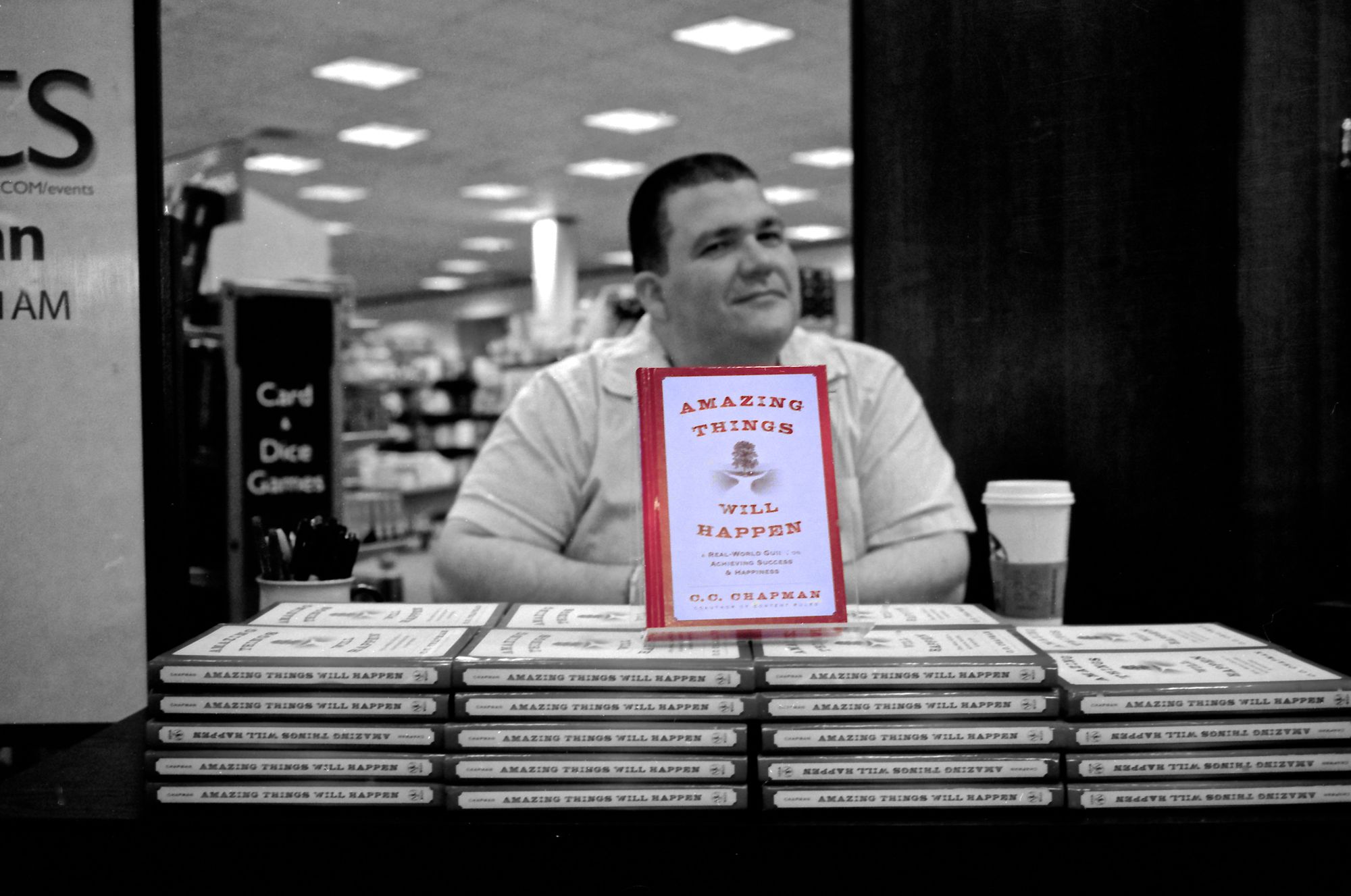 Why you should support (and share) your friend’s work

Taste, execution, and resilience. The three parts, to making your art.